The latest article in the Journal of Creative Music Systems discusses the life and work of inventor, composer and musicologist Rolf Gehlhaar and his contributions to contemporary music and digital sound design.

Gehlhaar was born in Breslau (Poland, 1943). In 1953, Gehlhaar and his parents, a rocket scientist and teacher of fine arts, emigrated to the USA, where he would study at Yale University and the University of California, Berkeley. He met Karlheinz Stockhausen, who was a Visiting Professor at the University of California, Davis. Gehlhaar would continue working with Stockhausen for several years, joining him in Cologne, as an assistant, performer and sound technician. From the 1970s onwards, Gehlhaar started working increasingly in the UK, although he also remained active in Germany.

Among his earliest works are Helix (1967), Klavierstück (1967) and Cello Solo (1966). Detailed descriptions of all later works are available on his website and various scores are available here. Together with Johannes Fritsch and David Johnson, whom he met whilst working with Stockhausen, he founded Feedback Studio (1969), a new-music performance centre and publishing house, which would remain his publishing outlet. From 1974 onwards Gehlhaar started researching computer-aided composition and digital sound synthesis, which would dominate the rest of this career. Gehlhaar was also a founding member of the Electro-Acoustic Music Association of Great Britain (1979) and was heavily involved in founding the British Paraorchestra, which was the first of its kind in the UK. 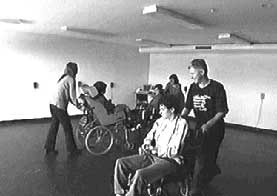 One of his most significant achievements in the field was the development of the SOUND=SPACE instrument, which was one of many new instruments he developed during his life. SOUND=SPACE is best summarised as a set of sensors set-up around an empty space, linked to a computer and synthesiser. Together, they translate the location and movement of the people within it into sounds. As such, SOUND=SPACE is an instrument that performers can play without the need for any physical contact with it. Gehlhaar himself described it as an “interactive musical environment”. SOUND=SPACE featured in various museum installations, performances and workshops. One notable use of SOUND=SPACE came through working with special needs users, often children. This video from 1984 shows SOUND=SPACE in action with a group of special needs children. In Gehlhaar’s own words “SOUND=SPACE offered many of the disabled people they worked with the first opportunity to make music freed from the awareness of their physical limitations” (Gehlhaar, 1991, p. 62). He would later go on to develop various other projects making music accessible for handicapped performers. Overall, SOUND=SPACE provided a medium for music projects in education, therapy and performance for more than two decades.


In conclusion, Gehlhaar’s work influenced many musicians and musicologists throughout the decades. His legacy lies in his development of instruments controlled without or with minimal touch and the provision for people with special needs who want to perform. He worked tirelessly to provide others with the means to express their creativity and create and perform music.

His contributions to music performance, composition and technology will be long remembered.